11 UNIQUE THINGS TO DO IN RIO DE JANEIRO 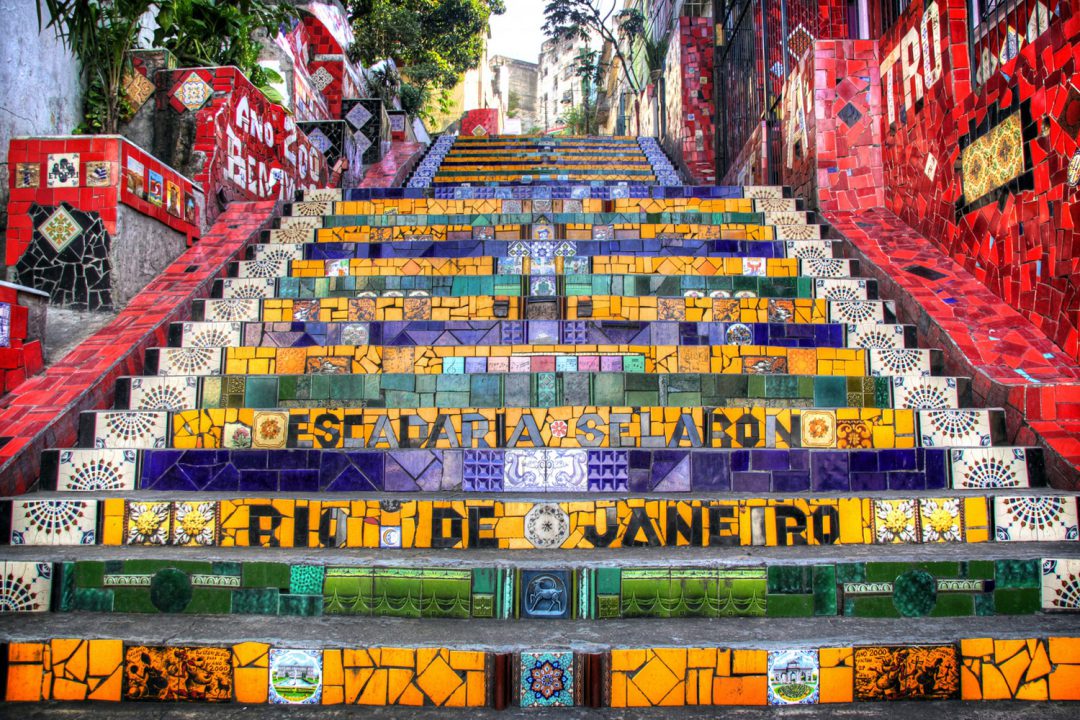 11 UNIQUE THINGS TO DO IN RIO DE JANEIRO

Brazil’s second city and home to this year’s Olympic Games, Rio de Janeiro is beguiling, fascinating, complex and at times a little intimidating. With so much history and natural beauty, one thing’s for sure: you’ll never get bored.

It’s not easy to fathom the beauty of looking down on Rio from Sugarloaf Mountain, out over Copacabana beach and up towards Christ the Redeemer. It’s hard to believe humans and nature could have got it so right.

Rio’s skyline could hardly be more recognisable, replete with Carioca institutions like the Maracanã, but there’s much more to the city than postcard shots: incredible architecture, adventure sports and peaceful gardens – this jewel on the Atlantic coast has it all. For those looking for something a little different, away from the main attractions, here’s 11 unique things to do in Rio.

Many tourists don’t bother exploring downtown Rio, preferring the more glamorous quarters of Ipanema and Copacabana. And sure, it can get a little hot and congested, but the city centre is the best place to learn all about the city’s history and start to unravel its complex identity. As the spot where the Portuguese royal family landed when they first arrived in Rio, Praça 15 de Novembro is a good place to start. There you’ll find some of the city’s finest colonial architecture, including the Imperial Palace (open Tue-Sun 12-7:30pm) – where Princess Isabel proclaimed the freedom from slavery act in 1888 – and Tiradentes Palace, currently home to the state legislature, where you can learn all about Brazil’s turbulent political history (open 10-5pm). If you get thirsty, go for a beer in one of the bars that spills out onto the street through Arco de Teles, on the north side of the plaza.

As the country with the largest Catholic population in the world, religion is a significant part of the Brazilian character. And there’s no clearer sign of this than the towering cathedral in downtown Rio.  A modernist structure (construction started in 1964), this volcano of a building is ugly to some and beautiful to others – but either way is mightily impressive. It’s huge. Twenty-thousand people can fit inside it at any one time. Inside you’ll find neon-esque stained-glass panels stretching up to a light-filled cross lying over the building’s circular roof. Surrounded by office blocks, it’s not set in the most salubrious location, but it’s definitely worth straying from Rio’s beaches to see this truly inspiring building (open daily from 7-6pm).

For a country that exports so much of the stuff, it’s surprisingly hard to find a decent cup of coffee in Rio, but there are a growing number of cafes dotted around the city where you can find delicious, home-grown coffee. Enter Curto Café. These guys take their coffee incredibly seriously. Their mission? To bring affordable, quality Brazilian coffee to the masses. Their method? Unique – there are no set prices for their coffees. Instead, customers are invited to look over a board listing the coffee shop’s overheads each month (including how much profit they made the previous month), and asked to pay what they think is a fair price. Curto café has a relaxed and friendly vibe, and the produce itself is spectacular. A must for all coffee aficionados. Alternatively, for a coffee in a unique setting, try Confeitaria Colombo. Sitting a few blocks from the imposing cathedral, it’s a true taste of colonial Brazil: intricate tile floors, a stained-glass roof and smartly dressed service staff. A very special place.

There are many culinary highlights in Rio, including pao de queijo (cheese bread) and the gorgeous feijoada bean stew, but the ultimate eating experience (read: food challenge) are the churrasqueiras. Not ideal for vegetarians – or full stomachs – churrasqueiras serve meat by the shed load as waiting staff amble from table to table offering different cuts. Eaters use a green-red card system to indicate whether or not they wish to continue eating – most people need at least a few breathers. One of the best churrasqueiras in town is Carretao. Located on a street just off of Copacabana beach, it boasts the dreamy combination of prime location and prime cuts. Service is from 12-11pm daily and it costs $25 to take on the churrascaria. There are vegetarian options, but this is all about the meat.

No trip to Rio is complete without a night out in Lapa. Perhaps the city’s best-known nightspots reside in this downtown district where there’s always a carnival atmosphere. Any night here should start at the arches – a stunning, two-storey, 18th century aqueduct. It’s the best place to find the true spirit of Lapa, with live samba music in the street and vendors selling healthy doses of caipirinhas to get everyone moving. The street parties happen on Fridays and Saturdays and go on until late. And if you get bored of the street party, there’s plenty more to choose from in Lapa. For something a little more upmarket there’s Bar leviano with decent cocktails and a lively dance floor. Another popular choice is Bar Scenarium, which has regular live music. Whether street party or bar, make some time to walk around, sip caipirinhas, watch the locals dance samba and soak up the last heat of the day. You’ll never forget Lapa.

There are few better ways to get the full picture of a city than by looking down on it from above, and for those seeking unparalleled views of the CidadeMaravilhosa and the chance to arrive at the beach in style, there’s only one option: hang gliding. Launching from one of the many mountains that surround the city, you’ll soar over rainforest, cruise over lakes and drink up the ocean before landing on one of Rio’s white-sand beaches. Rio Adventures offer tandem flights with experienced pilots for $150 in low season (April to November, excluding winter holiday and special events such as The Olympics). This isn’t for the faint-hearted, but is a truly unique experience.

As Rio’s ‘bohemian’ district, and a good stop off point on the way back from Christ the Redeemer, Santa Teresa is a must for anyone looking for another side of Rio. Its cobbled streets, pretty colonial houses and cafés are an effective antidote for the busier districts that hug the coastline. Santa Teresa used to be the domain of the rich and famous before they fled in the 1960s and 70s to the south of the city, away from the city centre. It later became a hub for local artists and artisans, and there are still plenty of small shops dotting Santa Teresa’s narrow streets where you can pick up local artwork. Whether you just stop by for a cold beer at the popular Bar Mineiro, or go for a wander, Santa Teresa’s unique hilltop vibes will certainly charm.

If you ever grow tired of Rio’s streets and beaches altogether and want some time out, you could do worse than heading to the botanical garden, situated close to Lagoa Rodrigo de Freitas and at the foot of PedraD’Agua. Opened in 1808, this is a tranquil space, where tall palms race to the skies and fountains trickle cooling water. Birds chirp, frogs croak and you almost lose the sound of the traffic in the distance. You may even see a monkey or two. Particular highlights are the more than 600 species of orchids, and you’ll occasionally find a break in the trees with impressive views of Christ the Redeemer in the distance. Opening hours are 8-5pm and tickets cost $3.

Beach life is a vital thread of Rio’s fabric. Socialising, sport, soul searching – a lot is done at the beach. Copacabana and Ipanema are spectacular – a must see – but whether you’re after something a little calmer, away from the crowds, or you want to build up your tan before taking on Rio’s finest, there are plenty of beaches a little further out of town that are just as spectacular as the big two. If you head south out of the city on the main highway, towards Barra da Tijuca, you’ll find plenty of stunning beaches – Prainha and Praia da Macumba are among the best. To make the most of it, you should rent a car for a day and beach-hop along the coast. Make sure to get a convertible and crank the bossa nova.

Rio is full of visually-striking scenes, but beyond the natural beauty, there are also some pretty special buildings to see. Half bird, half clam and looking like it’s flown in from the future, The Museum of Tomorrow is part of a broader regeneration project in the city’s old docklands. Opened in 2015, it’s an inspiring museum that takes the viewer on a journey through natural history and the impact humans have had on our planet, asking what might be done to build a more sustainable future. As home to 4.9 million square kilometres of forest – the second largest forested area in the world – Brazil urgently needs to address these questions and The Museum of Tomorrow is doing its bit in pushing the issue into the spotlight. Entrance costs $3, with free admission on Tuesdays.

Despite the daily procession of jaw-dropping views in Rio, there are still places that can truly take your breath away. The most popular destination for vistas is Sugarloaf Mountain, but the adventurous should try hiking up Pedra da Gavea. One of the tallest mountains in the world to border the sea, this giant monolith, just to the south of the city, offers mesmerising views of Rio and its surroundings. The trek up there is best organised through a local tour operator such as Rio Adventures (tickets cost around $90, based on a group of two) and can take 6-7 hours, including a short section of rock climbing. It’s not an easy trip, but you’ll forget the calf pain as soon as you reach the top and gaze out over the Atlantic’s endless blue. Source Travelmag.com